In the summer of 2017 Miami Dade College had zero cybersecurity courses. Today it has a robust, multi-level cybersecurity program.

“COMPASS was the one that took us from zero to 100 in four years,” said Principal Investigator Diego Tibaquirá. The project accomplished so much so quickly that it led to Miami Dade’s selection as EC-Council Best New Comer Award in 2019. 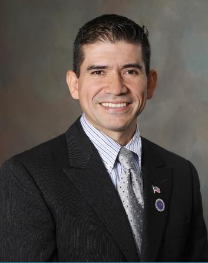 More than 80% of the students who have taken the cybersecurity courses developed with COMPASS are from populations historically underrepresented in STEM fields. Because preparation for industry certification exams is woven into every cybersecurity course (industry certification exams serve as the final exam in many courses) students have the potential to earn industry credentials along with college credits toward degrees.

Even the high school students who attend COMPASS boot camps in the summer have the opportunity to earn a basic industry credential.

“Credentialing is becoming a big part of what we do because students and employers are looking at that,” explained Tibaquirá. He is a computer science professor in EnTec, the college’s School of Engineering and Technology. He is tenured faculty and is 2021George W. Jenkins/Publix Super Markets Charities Endowed Teaching Chair.

Vouchers that are given to students to cover the cost of the industry certifications exams is one of the unusual aspects of COMPASS, which was started in 2018 with $223,928 ATE grant to Miami Dade College.

Tibaquirá’s goal is for more students from underrepresented populations to gain entrée to cybersecurity careers. He thinks industry certifications in tandem with college degrees are the best way to give students a firm foothold on the career path. So, in addition to covering the exam costs, the cybersecurity courses developed during COMPASS weave test preparation into skills instructions.

And Tibaquirá applies a big nudge: “My final exam is the industry credential [test],” he said.

Tibaquirá said he and his colleagues are trying to build seamless pipelines from high school to college computer science programs and technical careers. His focus in recent years has been on cybersecurity; other colleagues have focused on cloud computing and artificial intelligence. In August 2021 the department’s website listed nine grants from various sources including the NSA and NSF.

Tibaquirá is the lead for three of those initiatives. The newest is ASCEND, which received a $410,000 ATE grant in 2020 to expand on the work started with COMPASS.

“We kind of like to merge things together to make things work the best way possible,” he said.

This summer Miami Dade was again able to offer the COMPASS-funded cybersecurity boot camp for high school students. When the camp was last offered in 2019 to 60 students, 36 of the campers also earned an industry credential during the one-week program.

The best result was that 52 of the campers chose to enroll in the college’s dual enrollment cybersecurity program that bused high school students to campus.

In an interview this summer Tibaquirá said he was hopeful that more teachers would emerge from Miami Dade summer workshops with more industry credentials along with the skills and confidence to teach a 16-week introductory cybersecurity course in their schools.

Tibaquirá is a tenacious multi-tasker. He is a Phi Theta Kappa honor society advisor, for which he has received a second award in two years, and is an advocate and informal liaison for military and veteran students on campus. He restarted his postsecondary education at Craven Community College while serving in the Marines in the late 1990s. He used his academic journey – he recently finished his doctorate – and military service while participating on a statewide committee that established a uniform process for Florida public colleges and universities to award college credit for military training and experience.

This summer Tibaquirá hopes to earn a few more industry credentials himself.

“I’m getting certified in almost every class that I teach so that I can bring that back to the classroom and help them [students] out,” he said.