As a teenager Ignacio G. Rivera helped his dad – who has worked for a commercial window washing company for more than 30 years – set up equipment to clean the exterior windows at Cedars-Sinai Medical Center. At one point he told his dad, “I want to work here one day. I want to be on the inside. I want to know what it’s like.”

In his late 20s Rivera had a plan to become a nurse and if all went well to be involved in patient care at Cedars-Sinai. He had saved money while taking classes part time at Los Angeles Mission College in California and working full time. In fall 2021 he started arranging things to enroll in an accelerated nursing baccalaureate program at a private college. But, when he saw his first tuition bill with $2,400 per course charges and lots of fees, he reconsidered.

He was feeling defeated in January 2022 when an LA Mission College email with biotech in the subject line caught his attention. “It was a one-semester thing. I was like, ‘Why not? I’ve been in school so long, let me try biotech’ ... That did change my life. I’m really happy with where I’m working at today,” he said.

Today he is a research lab assistant for Cedars-Sinai’s Medically Associated Science and Technology Program (MAST) team. He began work in June, right after finishing the laboratory assistant biotechnology certificate program. When his dad saw his employee ID badge, “He was just the proudest,” Rivera said. 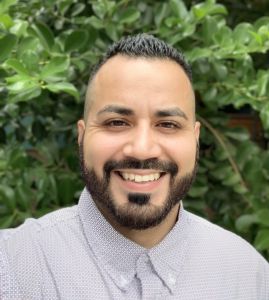 Rivera did not meet Arora until the first day of classes on February 7, but he was immediately impressed. She asked all the students to send their resumes to her. “I’ve never had a professor that asked for a resume, [and] I’ve been in school a long time,” he said.

Arora’s ATE project builds on the biotechnology certificates she developed with industry input in recent years at LA Mission College. She joined the faculty there in 2018 after several years as a research scientist at Cedars-Sinai and the David Geffen School of Medicine and teaching at Los Angeles Valley College.

Rivera, who had taken many science courses as a health science major, did not need the project’s Bridge to Biotech workshop, but he appreciated Arora talking with him about his resume and career aspirations. Employment counseling, a job readiness workshop, and internships are other aspects of Arora’s ATE project.

She asked Rivera about his work as a veterinary technician for a non-profit that did spaying and neutering of pets. Rivera worked there for a few years in his early 20s. He then worked for four years as a project manager for a fire alarm installation company prior to becoming a full-time student in early 2022.

In March, Arora told him about the opening for a lab assistant at Cedars-Sinai. Within weeks he had the first of four interviews with members of the research team. In the spring he also interviewed with two biomanufacturers; both offered him jobs too.

“Dr. Arora has her connections,” Rivera said, crediting Arora with helping him and other students get “a foot in the door.” Based on interviewers’ questions and his tasks at Cedars-Sinai, however, Rivera thinks it was what he learned in the one-semester certificate program that helped him get the employment offers.

During the first eight weeks of the semester, Arora teaches biotechnology basics such as micropipette techniques and calibration, lab note organization, aseptic techniques, how to operate and clean lab equipment like autoclaves and centrifuges, and how to do enzyme-linked immunosorbent assay (ELISA) experiments.

In the second eight weeks of the semester, the students work in groups on authentic research projects that use their new biotech skills. Rivera’s team analyzed saliva samples from 20 adults for Immunoglobulin G (IgG) antibodies and compared those data with the sources’ COVID-19 vaccination status. The team found that vaccinated individuals who had received COVID boosters had the highest IgG levels. Antibody counts were somewhat elevated for unvaccinated adults who previously had COVID. Other student teams have analyzed the chemical content of probiotic beverages and the effects of turmeric on the digestive system. 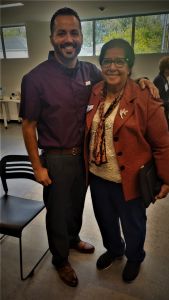 Rivera liked the project-based learning. “You actually got to see how something works, learned how it works, and actually use it at the end – hands on,” he said. He describes his group as the most willing and helpful he had ever been on in a college class. Everyone did their share of the work without nudging and the teammates have stayed in touch.

When asked if the course material was difficult, Rivera said, “Nothing is hard if you put in the work. I’ll put it to you that way. For me, it was privilege being a full-time student. So it was just go to school, come back, study, practice, train ... my free times were studying and it paid off ten-fold.” A marathon runner since he began participating in Students Run LA as a teenager, Rivera said that the guest speakers that Arora routinely brings to classes are “very motivating.” (The photo, to the right, of Rivera and Arora was taken at a recent biotech event.)

At Cedars-Sinai he uses equipment similar to what he learned on in LA Mission’s lab. His day-to-day assignments include making solutions and buffers, cleaning equipment, caring for lab animals, taking notes, and maintaining the lab.

“A clean lab is a better lab. Everybody’s happy with that,” he said, adding that colleagues have complimented him on the breadth of his skills. Some have thought he already had a bachelor’s degree.

With the many credits Rivera had earned as a health science major, he needed just a research methods course that he took this summer to complete an associate degree in biotechnology from LA Mission College. In a year or two he hopes to enroll in a biotechnology baccalaureate program while continuing to work at Cedars-Sinai.

“The work environment there, it’s just amazing. Everybody gets along so well ... Nothing but teamwork is right there. I like it,” Rivera said. He also likes having health insurance for the first time in ten years and a full benefit package that started immediately. During a late summer interview Rivera shared that he made an appointment for a vision check up.

He plans to continue talking to his younger brother about enrolling in the biotech program at LA Mission College. And he hopes to say hello to the high-rise window washers the next time they are at the medical center.

Last Edited: November 9th at 8:46am by Madeline Patton

excellent article! If you want to read another article, go to my [url=https://page365.ph/selling-on-shopee/]selling on shopee[/url] page and you will find everything you need to know.

Hello there! We have some exciting news for you. This is one of the best slot games I've ever played.
You can have fun while winning prizes and earning more promotions and rewards.
Let's have some fun in [url=https://fachai9.ph/]fachai9 online slots[/url].