Montcalm Community College’s robot technician education project has ushered in a new era of credentialing at the Michigan college.

Successfully incorporating industry credentials into the automation maintenance degree program for robot technicians has “spring-boarded” the addition of industry certifications to the college’s welding and machining programs, according to Deborah Dawson-Gunther. She is the principal investigator of the Educating Robot Maintenance and Repair Technicians to Address Workforce Gaps in Automation and Skilled Trades project funded with an Advanced Technological Education (ATE) grant and is a faculty member of the automation and advanced industrial technology department at Montcalm.

Rather than diminishing the college’s associate degrees and certificates, Dawson-Gunter said the industry credentials are encouraging students to enroll and addressing employers’ expectations. “The employers are happy about it,” she said.

“The world is changing around us....We need to change or die,” Rob Spohr said during a presentation at the 2022 ATE Principal Investigators’ Conference. Spohr was then the vice president for academic affairs at Montcalm. During the session on Industry 4.0 he and Dawson-Gunther explained why and how the college is tying as many courses as possible with industry credentials from various sources.

It all started in 2019 when the college received the $248,053 ATE grant from the National Science Foundation to start the new degree program for technicians who maintain robots.

As principal investigator, Dawson-Gunther had grant-funded release time to develop the curriculum. She used some of that time to meet with industry advisors to find out what they want technicians to know. She also took time to follow up with ATE educators she met at the 2019 ATE Principal Investigators’ Conference to learn how they were dealing with Industry 4.0 issues. 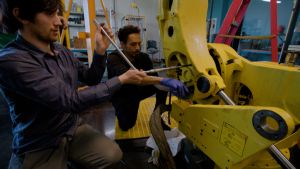 “We’ve done some really amazing things because of the ATE grant. Yes, we are always looking to improve our curriculum. I don’t think we would have gotten to it as quickly as we did without their support. It just wouldn’t have happened. We don’t have that kind of release time. We don’t have that money for training. So I think it was a huge benefit for us,” she said.

Each company wanted something particular to its industry, but all requested some sort of verification about what people learned.

Dawson-Gunther was familiar with heating, ventilation, and air condition industry certifications and the college’s machining instructors were aware of National Institute for Metalworking Skills (NIMS) credentials. So she began searching for a respected source for robotics education standards.

After considering several options she recommended the college go with the Smart Automation Certification Alliance (SACA), a non-profit that formed in 2017 to work with industry volunteers on standards for new technologies. More than 100 companies, including several international companies, have participated in developing standards and testing the verification processes that range from proctored written tests to in-person demonstration exams.

Several of Montcalm’s industry partners joined SACA so they would have a say in the standards. “That allowed us to create that program that all of our companies could buy into,” Dawson-Gunther said.

“SACA credentials are actually micro credentials, so what they do is represent basically one class. I’ve got 12 of them embedded in my technical programs right now. So if a student comes to us with one of those, then they are going to finish the rest of the program...It’s not a way of cutting ourselves off at the knees. It’s just a way to get [students] to see that ‘Hey, I have one less class I have to finish,’” Dawson-Gunther said.

Journeymen, who are eligible for 29 credits equal to an entire Montcalm certificate, have been enrolling in Montcalm to obtain the general education credits they need to complete associate degrees, she explained.

“We look at it as an investment on both parts. We know the journeyman has already gone to school. So we’ll get the gen-ed piece from them,” she said, adding that those individuals with micro credentials have “gotten a little bit of training, they’re going to come to us for the rest of it.”

Spohr and Dawson-Gunther reported the robotics curriculum also meets the requirements of the college’s accreditors.

After using ATE grant funding to pay the college’s first SACA fee as part of the college’s pilot test of the program, Montcalm added the $2,500 annual fee to its budget. SACA’s fee is flat—$500 for high schools and $2,500 for community colleges—regardless of the number of students who take its tests and earn its credentials.

How Montcalm Added Other Industry Credentials

The arrangement is different for the American Welding Society (AWS) and NIMS. Instead of a membership fee, AWS requires the college programs to adopt its standards and have an AWS-certified instructor verify that students have passed particular tests. “So as part of the [welding] class we’ve incorporated the skills into the class, and then our instructor is now AWS-certified,” Dawson-Gunther said, adding that Montcalm paid for the welding instructor to take the professional development for AWS certification. A similar approach has been used in the machining program. Montcalm incorporated NIMS’s standards in its machining courses and several faculty members have obtained NIMS credentials.

It is too early to tell how much the industry credentials and revamped programs will impact enrollment, but the robotics program shows promising signs. It had about 50 students in fall 2022. Most of the students are taking one course per semester. In October, 10 students had signed up for the introductory course that Dawson-Gunther will teach beginning in January, compared with five who took the intro course this semester.

Most of the apprentices enrolled at Montcalm participate in Michigan’s registered apprenticeship program. It allows employers to create customized skills training programs that receive support from Michigan’s Department of Labor.

In an email, Dawson-Gunter wrote, “Most of my automation students are apprentices for local companies. Depending on the company, they have different financial models. Tuition and books are generally covered. Some companies pay employees for their time in class along with mileage to and from the college. Others just pick up tuition and books. Some companies require the employee to pay back their investment if they leave before a certain length of time. Most apprentices get raises as they reach various levels within their programs!”

During his ATE conference presentation Spohr reported that 60% of Montcalm’s students do not want a degree. “For students it is all about return on investment—and what they can show employers to get more money,” he said, adding students want to earn credentials as quickly as possible and on their time schedules.

Industry has different, but related, priorities. He said, “Employers are not sure people can do what they say they can do.” Therefore, they like the imprimatur of third-party verification inherent in industry credentials awarded based on individuals’ performance on standardized tests or skill demonstrations.

Very crucial information as these days skills are very important Whether you're a professional or a graduate, in your job hunt, your skills matter. They tell potential employers what you can do, how you can do it, and even who you are.
Tutorchamps is a online homework solution provider with best tutoring services for all academic needs and for more details please visit at https://www.tutorchamps.com/