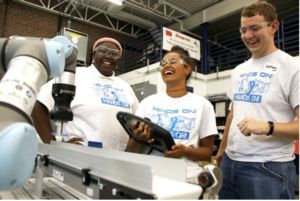 Several students laugh together while controlling a robot arm

Impacts of the ATE program and ATE projects and centers extend throughout the  year. The ATE-funded NextGen Technicians project provides evidence that summer is a perfect time to show young children the benefits of STEM education.

Last summer, NextGen Technicians hosted two summer camps for North Iowa students, which included building robot arms! NextGen Technicians  is based at North Iowa Area Community College (NIACC) and aims to increase the number of industrial technicians in North Iowa and to ensure that they are well-qualified to work with robots. The two camps run by the project last summer were offered to provide practical experiences that showcase the benefits of STEM technician career opportunities.

NIACC’s two camps offered were designed for students from elementary through high school. First was Mind Mania, for grades 3-8, and second was Minds On! Hands On!, which introduced high school girls to industrial careers using hands-on activities.

Two sessions of Mind Mania were offered, with a total of 31 campers attending. Anthony Riesen, the Innovation Workspace Coordinator at the NIACC John Pappajohn Center, led both sessions. Mind Mania’s Robo Rukus session introduced students entering grades 3-5 to robotics, the capabilities and limitations of robots, the mechanical construction of robots, sensors versus actuators and the wiring connecting these components, and the basic programming concepts. Campers constructed a tin can robot and a mBot in addition to utilizing languages designed to program them: Blockly-Primary, Python, and Arduino C.

A second session, Next Level Robots, was aimed at students entering grades 6-8. The goals for this were similar to Robo Rukus— encouraging students to delve further into the construction and programming of robots, which included adding grabbers and sensors. Vex and Tetrix robotics equipment were borrowed from the local high school robotics team for participants to create a robot. The Vex and Tetrix kits are designed to link two Android phones together—one phone takes commands from a game controller. It relays these directions to the other phone that receives the signal and controls the robot. This framework has been utilized in the nationally acclaimed FIRST Tech Challenge for many years.

The second camp, Minds On! Hands On! was held for high school-age girls from North Iowa the following week. CoPI Brian Mason assisted in the planning of the three-day event and aided, Anthony Riesen, who instructed the camp. PI Bob Franken spent a day with the campers explaining the Universal Robots (UR) housed in the NIACC Robotics Lab.

The campers were introduced to the basics of robotics, including the structure, electronics, and programming of robots. They built and programmed their own 3D Printed Robotic arms that utilize control software. Maestro Control Center and PolyScope were used for the 3D Robotic arms. All 3D Printed parts were made with PLA plastic filament on a Flash Forge Creator Pro Printer. Campers took their robot arms home when camp concluded.

Many thanks to the NextGen Technicians project for sharing a write up about the camps with the ATE Central team that formed the basis for this post.  Visit the project’s website to learn more about their work!

Last Edited: August 15th at 5:01am by Meredith Whye