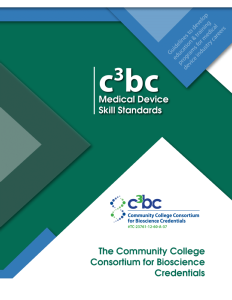 This 15-page document, published by the Community College Consortium for Bioscience Credentials (C3BC), explores medical device skill standards for bioscience professionals, developed by C3BC. These standards were developed for entry level positions, such as medical technicians or operators.

The document highlights the consortium's development process from 2012 to 2016, led by Sengyong Lee, including information on the initial groundwork for the standards and the various meetings that took place until they were officially introduced in 2016. Following this, the document highlights case studies on the implementation of standards in partnership with colleges throughout the United States. Finally, the document lists the medical device skill standards with a definition key.

(no comments available yet)