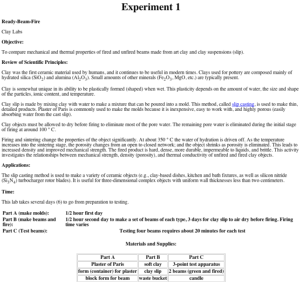 This experiment compares the mechanical and thermal properties of variously treated art clay. Students will be constructing beams made from art clay. They will then be sintering some of the beams and testing the differences in mechanical properties. The lesson is expected to span several days. On the first day, student make molds, which takes roughly 30 minutes. The second day is for making the clay beams followed by 3 days to allow the clay slip to air dry before it can be fired. Firing time varies but can usually be accomplished overnight. The final day is used to test the clay beams and requires roughly 20 minutes per test. There are four beams to be tested.

Is Related To
ATE Contributor

(no comments available yet)